Our book club meets every 3rd Thursday (with exceptions) of each month at 7:00 PM. Copies of the book are available at a discount to book club members in store. Please RSVP through Facebook, by phone, or in person. 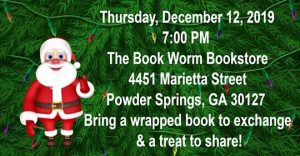 Book Club Book swap and holiday get together! Bring your favorite book that you would love to share all wrapped up and we will talk about the upcoming year and some suggestions! We have so many members but haven’t met a lot of you so hoping to see a great turnout. Bring a dessert or snack to share, the store will provide drinks and coffee. Bonus shopping time with a book club discount from 6pm -7pm and 8-
8:30pm! Please RSVP and bring a new friend too!

A Gathering of Old Men by Ernest J. Gaines 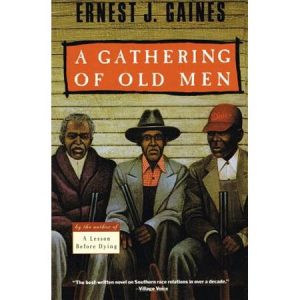 Novembers book club info http://bookclub.bestinpowdersprings.com to RSVP Come up with 2 questions to discuss and join the conversation November 21st

Set on a Louisiana sugarcane plantation in the 1970s, A Gathering of Old Men is a powerful depiction of racial tensions arising over the death of a Cajun farmer at the hands of a black man.

“Early in this eloquent novel . . . a sheriff is summoned to a sugarcane plantation, where he finds one young white woman, about eighteen old black men, and one dead Cajun farmer.  The sheriff is sure he knows who killed the Cajun—although each of the men is toting a shotgun only one of them could hit a barn door—but threats and slaps fail to change their stories.  Each one claims guilt, and all but one promise to provoke a riot at the courthouse if the sheriff tries to make an arrest.  In the meantime, they wait for a lynch mob that the dead man’s father—like the son, a notorious brute—is sure to launch. . . . Before it is over, everyone involved has been surprised by something; the old black men not least of all, by their first taste of power and pride.” —The New Yorker

This error message is only visible to WordPress admins


Error: API requests are being delayed for this account. New posts will not be retrieved.

Make sure this account has posts available on instagram.com.

We are your friendly downtown Powder Springs used bookstore!

Check out this Meetup Group in Powder Springs: https://www.meetup.com/Powder-Springs-BookWorms-Meetup-Group/ #Meetup #PowderSprings via @Meetup